Salto - Jewish motifs in the film by Konwicki

Anna Kraus
Tadeusz Konwicki, a recognized author of excellent novels titled ‘A Minor Apocalypse’[Pol. Mała Apokalipsa’] and ‘A Chronicle of Amorous Incidents’ [Pol. Kronika wypadków miłosnych] will also be remembered as a screenwriter and director in the history of Polish cinema. In 1958 his film ‘Ostatnim dniem lata’ was enthusiastically received by the Polish audience. In 1965 he directed the film ‘Salto.’ 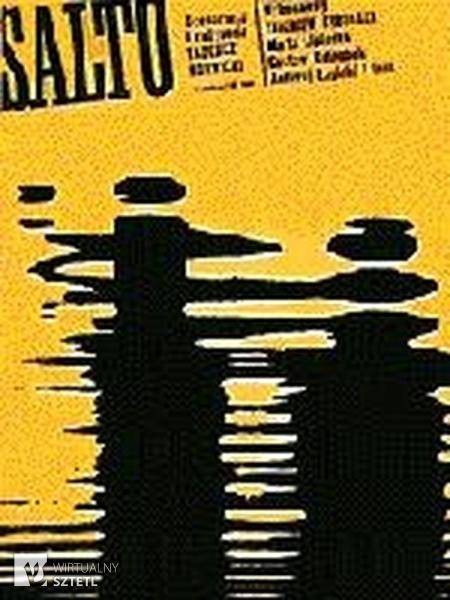 The film deals with an identity problem and the issue of social roles assumed by people, even sometimes without being aware of it. The film’s plot is set in a certain provincial town which is visited one day by a mysterious stranger, who claims to be Kowalski-Malinkowski. This man tells everybody that he has to be in hiding and keeps presenting the town dwellers different versions of his life story… However, it is not only him who pretends to be or is mistaken for someone else… One man who happens to host him is frustrated since he is generally believed to be a good man by all locals, while the truth is that all he dreams of is to do dirty tricks on them. The host’s daughter, Helena, is dubbed by a stranger Maria, the name of his mother… The local seducer is suffering because women cannot understand that he ‘is seeking spiritual elevation…’

The superb Zbigniew Cybulski stars as a stranger. A ‘good man’ is played by Gustaw Holoubek and Helena by Marta Lipińska. The role of Włodzimierz Boruński, an excellent but rather forgotten actor, is also worth highlighting.

This poet and satirist was active in the interwar years as a director and writer of the texts that were staged in variety shows. After the end of the war, he wrote sketches and songs for the Syrena Theater. In 1961 Tadeusz Konwicki persuaded him to start his cinema career. His looks enabled him to play the roles of Jews. In the film ‘Zazdrość I medycyna’, he portrayed the moving figure of the tailor, Gold. His subsequent roles were those of Helpern in ‘Ziemia Obiecana’ and Birnbaum in the film ‘Sprawa Gorgonowej.’

In the film ‘Salto’ Boruński impersonates a browbeaten old man whom Kowalski-Maliniowsky has talked into launching an artistic career. This character is at the same time both funny and pathetic, melancholic and mysterious. Through this figure, Konwicki inserts a Jewish theme to the film, dealing with such problems as rescuing Jews at the time of the war.

During the first encounter, the old man confesses to Kowalski that he had to hide during the war, which was not easy since he took after a Jewish actor, Blumenfeld. ‘I was even forced to wear a cassock once’ – he says while recalling the past. The war left a big mark on him. He got used to hiding away. He does not walk, rather he creeps now… He says that before the outbreak of the war he was thought of as a clumsy person. During the occupation, however, he changed and became a man. ‘Five years behind a wardrobe. Even authentic Jews were afraid of hiding with me,’ he admits. Surprisingly, the ones who were in hiding were considered to be courageous and not cowards, as it is nowadays…

Thus, it is not random that the climax scene of the film is set in a former synagogue that has been converted into a storehouse. The word synagogue stems from Greek and denotes a meeting place. The old synagogue is no longer a place for mutual prayers. Therefore the locals, to celebrate a holiday, organize a dancing party there. Yet, one can still feel the spiritual atmosphere in the building, which makes people confide more eagerly.

During the break between dances people whisper and make a clean breast of their frustration and dreams… The old man, acting as Blumenfeld, sings a song about a human who stumbled his way through his life, making allusion to the topos of the eternally wandering Jew. After the performance, encouraged by the ovation of the neighbors, he decides to leave the town and start his career.

The very same evening, the desecrated synagogue turns into a place where the poet prophesies the unheard-of collapse of humanity. Once, he says, people fell down head down, now they are falling in all directions, like a compass rose. Falling horizontally and no more vertically….They are plummeting, making SALTOs…[ Pol. for somersault)