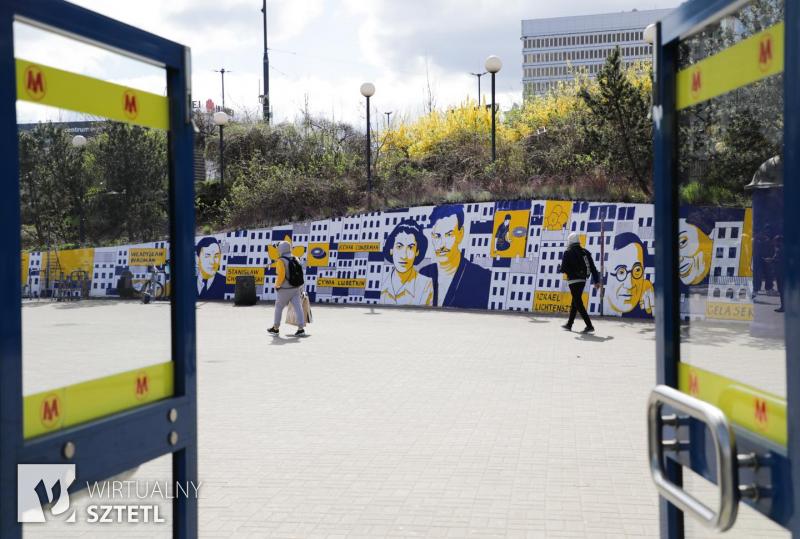 The ghetto was not only dirt, stench, poverty and killing. Normal life was also happening there. In the harsh and cruel conditions, well hidden behind walls from the rest of society, real everyday life took place - the inhabitants of the ghetto were able to rise above the reality of the occupation. It must be widely known how people actually lived in this walled off city of half a million, and not just how they had their heads cut off. It is necessary to show the other side - the side of humanity, which they did not lose in this misfortune. The greatness of the people in the ghetto was that in such cruel conditions they knew how to make love, they knew how to devote themselves to other people. […]

And love was very important back then. It was impossible to live there, in the ghetto, alone. Without it, it was impossible to survive and remain human. It was always necessary to have a significant other, in the sense that you had to have another human being with you who thinks the same, who is just as into you as you are into them. For whom you will do anything, as they would for you. This is love.

Love is the main theme of the 79th anniversary of the Warsaw Ghetto Uprising and the Daffodils campaign organized by the POLIN Museum of the History of Polish Jews.

When we try to imagine the emotions experienced by Jews confined in ghettos, we usually think of suffering, fear, despair, and resignation. But - as Marek Edelman, a witness of the era, emphasized - in this tragic situation there was also a lot of room for feelings that were in opposition to the nightmarish reality of a gated neighbourhood: friendship, devotion and even love. The latter appeared in various forms, from parental and fraternal, manifested through care and devotion to loved ones, to romantic love, illuminating the long months of being in a dangerous and abnormal situation.

We retell the stories about the different faces of love and the meaning that they had in the Warsaw ghetto - and still have today - mutual care, tenderness and sensitivity to the needs and harm of others:

• Anna Braude-Heller, director and head of the infant ward in the hospital located in the ghetto, who stayed with her patients until the end of her life;
• Alina Margolis-Edelman, nurse, participant in the Warsaw Ghetto Uprising and the Warsaw Uprising; after the war - a doctor involved, among others in the activities of the Doctors of the World organization,
• Ms Stefa - Stefania Wilczyńska, pedagogue and co-founder of the Orphans' Home for Jewish children in Warsaw, who died in Treblinka death camp together with her pupils,
• Miriam Ajzensztadt, who raised the spirits of people imprisoned in the Warsaw ghetto with her singing,
• Pola Lifszyc, a teenager who ran a children's theater in the ghetto, who, not wanting to be separated from her mother, voluntarily went to the Umschlagplatz and boarded the train going to the extermination camp,
• Civia Lubetkin and Icchak Cukierman, a pair of Zionist activists, initiators of the Anti-Fascist Bloc and the Jewish Combat Organization, fighters of the Warsaw ghetto, and after the war - co-founders of the Ghetto Fighters Museum,
• Gela Seksztajn and Izrael Lichtensztajn, painter and teacher co-creating the underground archive of Oneg Szabat, parents of little Margelit,
• Irena Sendler, head of the children's section of Żegota, and her partner, social activist Adam Celnikier (Stefan Zgrzembski), whom Sendler led out of the ghetto,
• Stanisław Chmielewski, who helped over twenty Jewish men and women as part of a promise made to his beloved, Władysław Bergman.

From 18 to 30 April in Warsaw, at the Centrum metro station, you will be able to see a mural commemorating these people and the different faces of love related to their stories.

Read more about love, mutual care and sacrifice for loved ones in the accounts of Survivors of the Warsaw Ghetto from the POLIN Museum collection.

You can watch and listen to more testimonies (in Polish) on the new channel on YouTube, "Oral History / POLIN Museum Collection," in the Witnesses of the Warsaw ghetto section.

You can read more about the program of the 79th anniversary of the outbreak of the Warsaw Ghetto Uprising and the Daffodils Campaign under the slogan #RememberingTogether (Polish: #ŁączyNasPamięć) and about the commemorated this year.