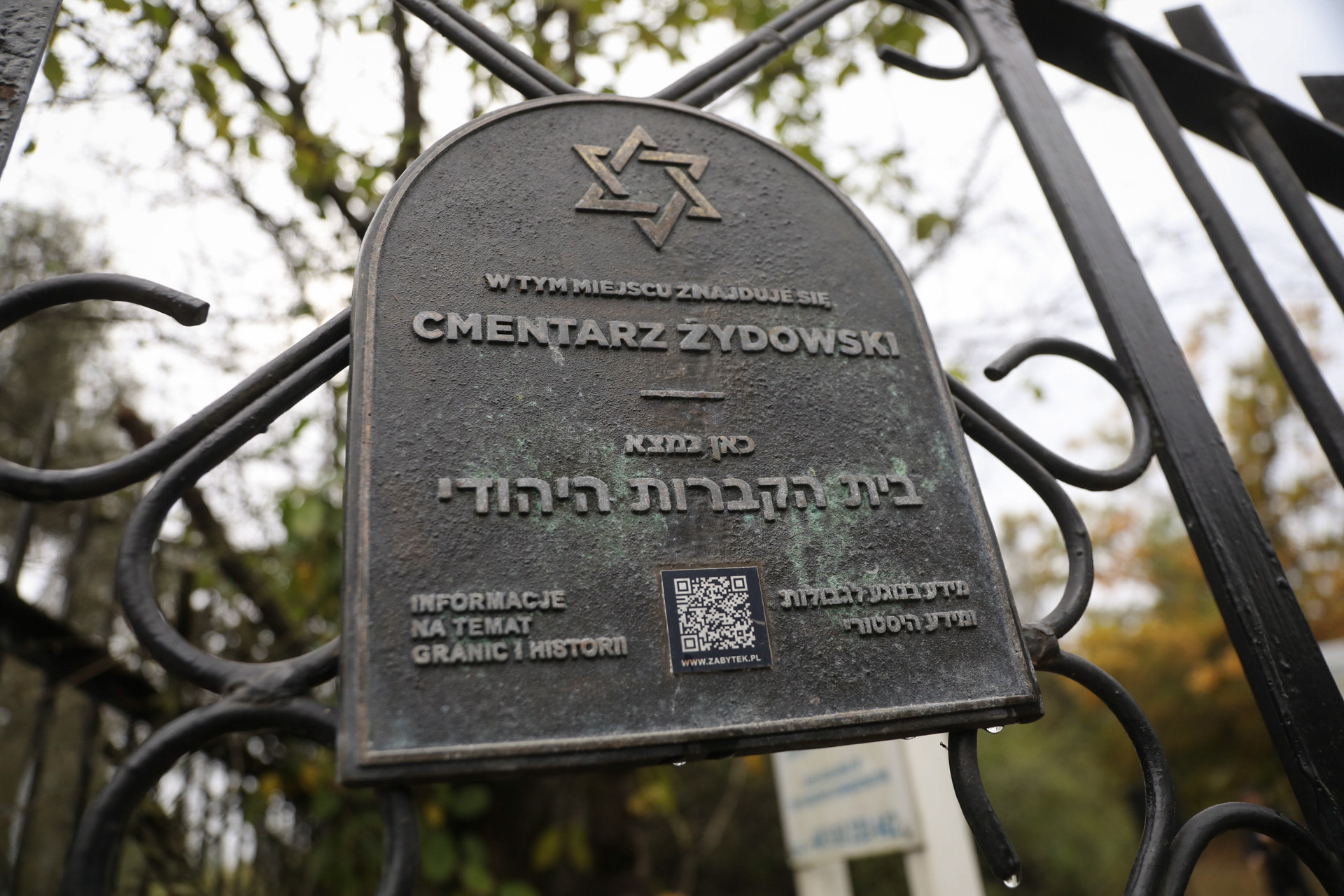 The first round of ceremonial presentations of the markers of Jewish cemeteries has been completed. The project, initiated by the Ministry of Culture, National Heritage and Sport, is part of a project to describe and mark Jewish cemeteries, carried out jointly by the POLIN Museum of the History of Polish Jews and the National Heritage Institute, as well as local partners.

New signs, the shape of which refers to matzevot, with an inscription and a QR sign, referring to the broader characteristics, placed on monument.pl [Pol. zabytek.pl] website. The following necropolises have been ceremoniously given the new markers:

The ceremonies were a great success with significant social and media resonance. It is worth emphasising the involvement of local partners, the presence of representatives of state authorities, many representatives of local communities, including local authorities, and above all - a large number of young people, which allows us to believe that the protection of cemeteries will gain a permanent, long-term character. Each ceremony took place in the presence of rabbis, with full respect for the rules of Jewish ceremonial.

The celebrations were accompanied by events aimed at the local community. These were mainly educational workshops for pupils from local schools, which allowed the participants to learn a different dimension of the history of their towns and villages and to broaden their knowledge of traditions connected with Jewish cemeteries. The school also received an educational kit entitled “Museum in a box. Town of Malki”, containing replicas of objects and archival photographs from the POLIN Museum’s collection, which allows for playing an educational board game in forms from 4 through 6.

It is worth mentioning that in addition to field designations, the programme includes intensive documentation, research and descriptive work. In 2018, thanks to the efforts of the staff of the National Heritage Institute, a field inspection of nearly 1,200 Jewish cemeteries - practically all Jewish necropolises in Poland - was carried out. As of 2020, the POLIN Museum of the History of Polish Jews has prepared approximately 160 cemetery descriptions. They are gradually being translated into English and Hebrew and then submitted for use on the zabytek.pl website, run by the National Heritage Institute. POLIN has also made several research visits and has documented and indexed 300 of the essential tombstones in the cemeteries of Okopowa Street (Polish: ul. Okopowa) in Warsaw, Ślężna Street (Polish: ul. Ślężna) in Wrocław and Remuh Cemetery in Kraków (in preparation). Reports related to the project posted on social media reached nearly 100,000 readers.

As Minister Jarosław Sellin said at the ceremony in Orla, the aim of the project is “to bring about a situation in which such commemorations would be in 1,200 places, so that [...] an important community in many Polish towns, villages and cities would be present and remembered thanks to such permanent markings”.

The presentation of the plaques and the accompanying programme is realised within the framework of the “Jewish Cultural Heritage” project (Component IV Neighbours: objects, people, stories, Priority 2 Programme of describing and marking selected Jewish cemeteries), financed by a grant awarded to POLIN Museum by Iceland, Liechtenstein and Norway through the EEA Fund and by the national budget. The project aims to protect and popularise the heritage of Polish Jews through educational and cultural programmes.