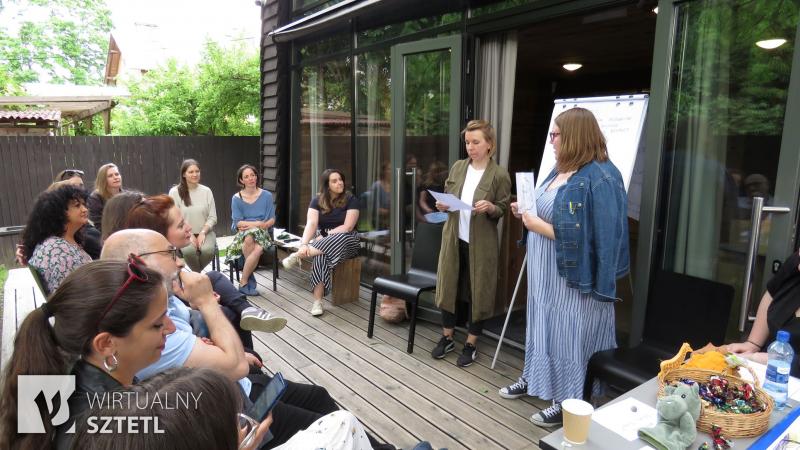 For more than a year now, employees of the POLIN Museum in Warsaw, the Mémorial de la Shoah in Paris, the Žanis Lipke Memorial in Riga and the Holocaust Fund of the Jews from Macedonia in Skopje have been learning ‘‘Nonviolent Communication” (NVC), a method developed by Dr Marshall B. Rosenberg, an American psychologist, which serves to foster dialogue and build societies based on empathy and understanding of the needs of each individual. In June 2022 the partners met in Riga and discussed various ways of using this method at work with the audience of the Latvian memorial site.

The first meeting of partners of the project the “Nonviolent Communication Approach in Adult Education in Historical Museums and Memorial Sites” in February 2022 in Paris ended on the eve of Russian aggression against Ukraine. The principles of the so-called nonviolent communication in the context of the social memory of the Holocaust, which was learnt at the time, took on a new, contemporary context after 24 February, which the partners decided to look at at the next meeting. The June seminar in Riga was therefore devoted not only to historical issues but also to the role of nonviolent communication in the face of contemporary war and the social polarisation which occurs in this context in Latvia.

During a training programme at the Žanis Lipke Memorial in Riga from 6-8 June 2022, project participants discussed ways to use NVC with the memorial audience, paying attention to local social, historical and political circumstances and their impact on the formation of Latvians’ collective memory of the Holocaust. Some of the examples discussed dealt with the contemporary context of the war in Ukraine, the perception of which causes numerous social tensions in Latvia. Exercises relating to specific communication situations were led by NVC trainers Imelda Podiņa and Céline Huart from Empathy Tank Baltic and interspersed with expert meetings and lectures, as well as visits to memorial and Holocaust sites.

You can read more about the the “Nonviolent Communication Approach in Adult Education in Historical Museums and Memorial Sites” project here.

On behalf of the hosts, curator and educator Maija Meiere-Oša introduced participants to the history of the Lipke family, to whom the Riga museum is dedicated. The Žanis Lipke Memorial is located on Ķīpsala Island and tells the story of the family of port worker Žanis Lipke, who, during the German occupation, together with his wife Johanna, rescued Jews from the Riga ghetto. As a Luftwaffe supplier, Lipke helped forced labourers to escape and hid some of them in an underground bunker in his shed. Discussing the history of concealment and the exhibition treatments used requires Žanis Lipke Memorial staff to be able to show empathy and recognise visitors’ needs in the spirit of nonviolent communication.

History and memorial sites of the Holocaust of Latvian Jews

The participants learned a broader historical and social context for the history and commemoration of the Lipke family thanks to Dr. Didzis Bērziņš from the Institute of Philosophy and Sociology of the University of Latvia. Dr. Bērziņš talked about the history of the Holocaust of Latvian Jews and about the politics of memory, historical research and cultural texts (literature, film) on this topic while Latvia remained a part of the USSR. The history of Riga’s Jews during the Holocaust was explored in detail by seminar participants during a drive through the former Riga ghetto and visits to memorial sites. The director of the ‘‘Jews in Latvia” museum, Ilya Lensky, recounted the tragic events in the forest near the Rumbula railway station, where the Germans and Latvian collaborators murdered some 25,000 Riga Ghetto prisoners and 942 foreign Jews brought from Berlin. The consortium staff also learned about the history of the Salaspils concentration camp. In 1967, a memorial was established there: a museum and numerous commemorations of the victims: including children, at the site of their barracks, and Jews brought here from Germany, Austria and the Czech Republic. The seminar participants also visited the site of Jumpravmuiža (Jungfernhof), a makeshift concentration camp where about 4,000 Jews from Germany and Austria and about 2,000 elderly and people with diabilities were killed. Over the graves where the victims were buried, the Germans laid railway tracks. The process of accurately locating the mass graves is still ongoing.

Another important highlight of the seminar was the Riga memorial to the soldiers of the Soviet Army - ‘‘liberators of Soviet Latvia and Riga from the hands of the German-fascist occupiers”, which a tight police cordon permanently surrounds today. Built at the end of the USSR in 1985, the monument has long been controversial in Latvian society, 26% of which is Russian minority. Some residents see it as a symbol of the Soviet occupation of Latvia, while others consider the monument and the period in which it was created to be part of the country’s history. In the face of Russian aggression against Ukraine, however, the presence and meaning of the monument have taken on a more substantial symbolic significance, leading to even deeper polarisation and calls for its demolition, as the director of the Žanis Lipke Memorial, Lolita Tomsone, told participants. The issue of the monument provoked a lively discussion and provided an excellent example to practice NVC and try to understand the needs of both sides of the conflict.

A special part of the training programme was devoted to the topic of the use of NVC in the context of the ongoing war in Ukraine. Participants in the consortium strongly feel its presence in their daily work with audiences - both in the context of current events and historical issues. Through the zoom platform, participants listened to Dr. Natalia Otrishchenko, an employee of the Center for Urban History in Lviv. Her lecture “How to listen in wartime?” was about the documentary project “24.02.2022, 5 am. Testimonies of War”, in which documentalists of the Center are collecting accounts of refugees arriving in Lviv from other parts of Ukraine. Dr. Otrishchenko explained in detail the methodology of the project, its objectives and the challenges faced by the storytellers and researchers, paying particular attention to the ethical aspect of the interviews, which have a strong emotional charge but also empowering qualities. Participants looked at how the current situation of refugees in the project partners’ countries affects local public sentiment and the work of history museums during a talk by Agnese Lāce, a Latvian expert on migration and integration policy. Agnese Lāce talked about official and grassroots programmes to support refugees and their mixed reception in the Latvian public sphere.

“Keeping faith in humanity. Especially now”: read more about the NVC in the context of the war in Ukraine in the article by Maija Meiere-Oša, educator and curator of the Žanis Lipke Memorial.

The next training meeting is scheduled for September 2022. The partners will meet at the headquarters of the Holocaust Fund of the Jews from Macedonia in Skopje.

You can read more about the meeting in Riga in June 2022 on the EPALE platform.

Project co-financed by the European Commission under the Erasmus+ programme.
The European Commission's support for the production of this publication does not constitute an endorsement of the contents, which reflect the views only of the authors, and the Commission cannot be held responsible for any use which may be made of the information contained therein.