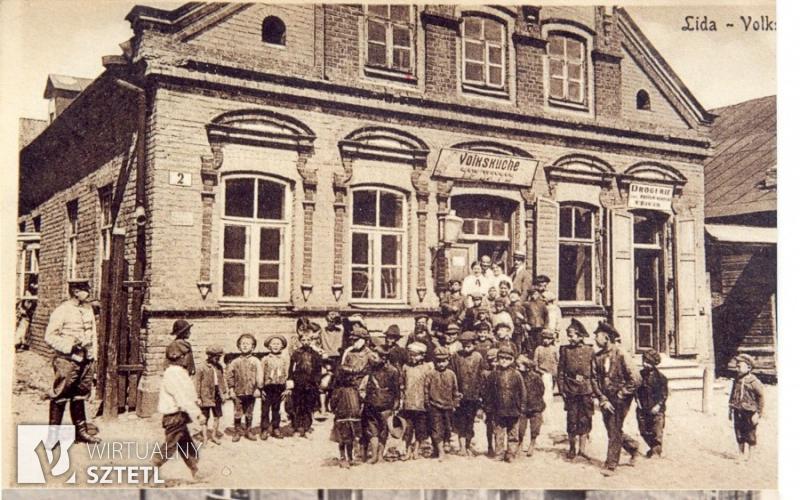 Jews first settled in Lida in the second half of the 16th century. In 1579, the local Jewish community was granted a privilege by King Stephen Báthory that allowed them to build a synagogue in the town. The Jewish community living in Lida was quite small in the beginning. During the reign of King John Casimir (1648-1668), it numbered only 160 members.

The earliest mention of an organised kahal in Lida dates to 1623 and concerns its subordination to the kahal in Grodno. The correspondence between an auxiliary kahal [przykahałek] in Lida and neighbouring kahals survives from this period. In 1633, King Władysław IV Vasa permitted the Jews to renew the old synagogue and build a new one, which, however, was not allowed to be taller than the Orthodox church or the Catholic church.

Dawid ben Arie Lejb Lida was appointed as rabbi in Lida in 1671. He was the author of a popular book on the study of the Torah titled Ir Dawid (The City of David). His son Pesachian as well as his grandson David Benjamin also became rabbis in Lida. From 1800-1845, Elimelech Kamieński, and later his son Eliasz Akiwa Kamieński, were the rabbis of Lida. The latter was also a dayan – a religious judge.

At the beginning of the 18th century, most of the town’s Jews were engaged in trade or agriculture. In 1766, 1,167 Jews in the town paid taxes.

Beginning in the middle of the 19th century, Eliasz Szik was a rabbi in Lida. He was noted for his brilliant sermons, and was said to perform many miracle’s before people’s very eyes. His book Ejn Elijachu (The spring of Elijah) was a comment on a collection of Talmudic legends, known as Ejn Jaakow, and was published in Vilnius. Tzadik Benjamin Lida became successor of Eliasz Szik.

Rabbi Moishe Isaac Darshan (1828-1899), also known as Kielmski Magid, played a significant role in the community of Jews in Lida in the 19th century. He was the leader and the main preacher of Musar, a religious movement of a pietistic nature begun by Israel Lipkin Ben Zeev, also called Israel Salanter. Rabbi Darshan and his son Ben Zin Darshan settled in Lida in 1898, and Rabbi Darshan died a year later. In 1886, the Jewish community in Lida was led by rabbi Yitzhak Yaakov Reines (1839-1915), a religious leader for the Zionist movement. In 1905, when the towns intellegenstia had the need to make a living as professional scholars, Reines opened a new type of yeshiva with Baron Günzburg was one of its primary patrons. The yeshiva quickly became famed throughout Europe. It was closed at the beginning of the World War One, but the teaching practice was resumed in 1923 with the support of the committee of the yeshiva located in Vilnius.

In 1897, there were 5,166 Jews in Lida, accounting for 68% of the town population, and 24,813 in the district (12%). In 1879, there were 189 registered craftsmen in the town, most of whom were Jews. In the end of the 19th century, the emigration of Jews to the USA from the area became commonplace. At the beginning of 1885, a collection for building a Mazkeret Batya settlement in Palestine was set up by the Jews in Lida.

In around 1902, political organizations such as The Bund, Poale Zion and the association of Zionist Socialists commenced activities in the area. People associated with these parties organized secret meetings in the forests around the town and agitated in the synagogue and among Jewish workers.

In 1918, Aaron Rabinowicz became a rabbi in the town. He was killed along with the majority of Lida’s Jews during World War Two.

In 1921, there were 302 Jewish-owned shops in Lida. Half of the shops were family businesses. Thirty-seven of the town’s Jews worked on farms. In the 1920’s and 1930’s, Jews were engaged in trade, craft, and industry.

In Lida during the 1930’s there were four different Jewish schools, three Jewish libraries, five theatre groups, an extramural school for adults, three Jewish sports organizations, a synagogue, twelve houses of prayer and a hospital with 18 beds. Towrzystwo Wzajemnej Pomocy (the Mutual Aid Association) opened day care centres for children from poor families, an infant care centre and a milk kitchen. It also carried out medical examinations for the area’s children.

During the interwar period, several Jewish weeklies were printed. Lider Wochenblat was first published in 1929, Lider Woch in 1932 and Lider Lebn in 1936. On 13 April 1937 an issue of Unzer Ruf was published only once. In 1933, a historical committee was set up in the town that collected materials related to the Jews of Lida. The committee intended to publish a monograph, but sadly the task was not completed.

Before this time, Lida did not have an indented kahal or a Jewish council. A council was established at the beginning of the 1920’s with the support of American Relief Group to Supervise Aid. The council’s first election was held in 1932; the second took place on September 6, 1936. The Polish government considered the new council the legal representative of the Jewish community from Lida. Also during this time, a strong Zionist movement existed in the town. Its representatives organised the activities of HeHalutz and Hashomer Hatzair. In total, both organizations numbered about 500 people. The league of Jewish workers was also very active in the town at the time. In 1933, the federation of young workers Histadrut HaOved was established. Its mission was to prepare its members for emigration to Palestine. At that time, Lida was often visited by Włodzimierz Żabotyński and Natan Bystrzycki two famous activists and thinkers of the Zionist movement.

On September 18, 1939, the Red Army entered Lida. The new Polish-Lithuanian border was established nearby. The Jewish population in the town saw a significant increase in Polish Jews who planned to escape to Vilnius and then to the United States. In Lida at the time, there was an underground Zionist organization. After a series of arrests by the NKVD in December 1939, Zionist organizations, and just a year later all Jewish organizations, were abolished. In 1940, the Jewish population stood at 15 thousand. By summer, the Jews who escaped from the western part of Poland were relocated deep within the USSR, primarily in the Rybinsk region.

When German troops entered Lida on 27-28 June 1941, there were 8,500 Jews living in the town. On July 5, 1941, the Germans carried out an organized massacre of the Jews living in Lida. In all, they executed approximately 2,000 Jews. The remainder were walled into a ghetto. In May 1942, the ghetto was liquidated and its Jewish inhabitants were shot. Only about 300 people survived the pogrom.

In the 1950s, the Jewish cemetery in Lida was destroyed.