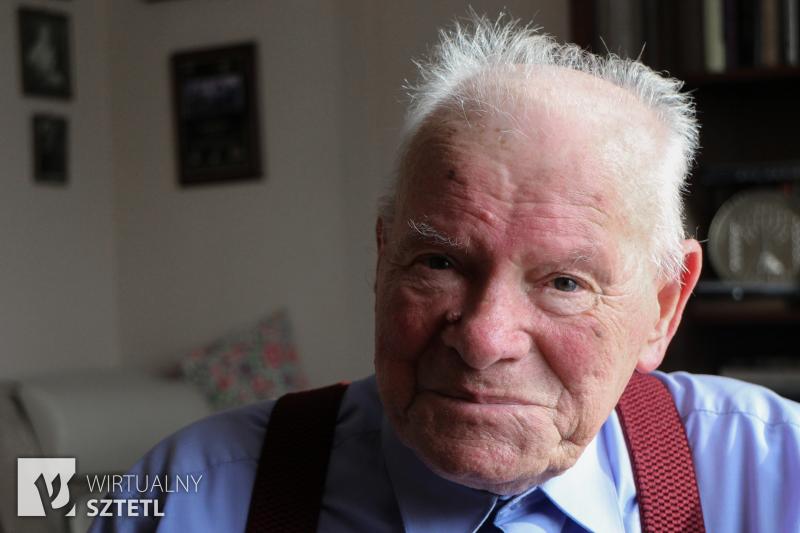 On the brink of war, Henryk Prajs starts his military service in the 3rd Light Cavalry Regiment in Suwałki, where he is caught by the outbreak of the War. He takes part in the September Campaign and is taken captive by the Russians. He is released and comes back to Góra Kalwaria, his hometown. Along with his whole family, he is put in the ghetto. Persuaded by his mother, Henryk Prajs makes a successful attempt to escape from the ghetto.

He ends up in a peasant family in Rozniszew, a village near Miszew, 7 km away from Góra Kalwaria. Ms Wsilewska, interviewee’s neighbour, and later his mother-in-law, has her sister obtain a baptism certificate for Henryk Prajs, issued for one Feliks Żołądek.

In 1945, Henryk Prajs returns to Góra Kalwaria and makes efforts to preserve what has remained of the Jewish world – he starts the initiative to fence a local Jewish cemetery and takes an active part in the revival of Jewish religious practices.

Henryk Prajs has very fond memories of his years in the Kozietulski 3rd Light Cavalry Regiment in Suwałki, “It was the best time of my life”, he says. This special nostalgia for the period spent in the Polish army is associated primarily with the respect he enjoyed in his unit – he received a per-diem allowance for kosher food. “He is a believer, so he will make a good soldier”, his superiors used to say. Now he is involved in the popularisation of the Polish cavalry tradition.

Henryk Prajs is known as “The Last Jew in Góra Kalwaria”.

The interview was recorded in the interviewee’s house in Góra Kalwaria. The meeting was arranged over the phone. The meeting was directly motivated by the fact that Henryk Prajs provided a fragment of the history of Góra Kalwaria Jews, which he had written down in secret in the Yiddish language. The author described the life of the Jewish community before the War – its history, customs and everyday life. Written on 10 pages, these memoirs had been hidden in the barn, under its thatched roof. The author came back to retrieve it in 1948.