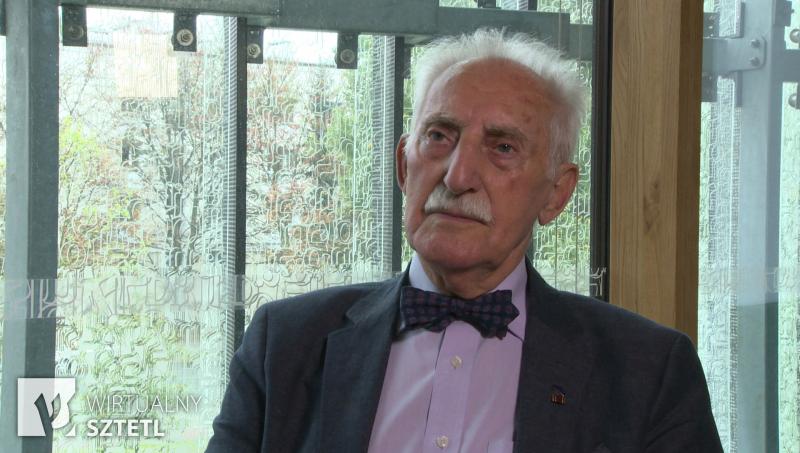 Leon Weintraub was born on January 1, 1926, in Łódź in the family of Szula-Szlomo and Natalia. Leon Weintraub’s father died in 1927. In order to provide for a big family (son and four daughters), his mother opened a small laundry at 2 Kamienna Street in Łódź. By the time the war broke out, Leon Weintraub has completed 4 years of a general education school. In 1939, Weintraub’s family moved to the area of the Łódź ghetto, where he completes one more year of a general education school. He worked in a galvanising workshop, later at a metalsmith’s, and then as an electrician. In August 1944, the Weintraub family was taken to Auschwitz-Birkenau, where Leon is separated from the rest of his family.

A few weeks later, Leon Weintraub escapes from Auschwitz-Birkenau, gets to a transport to Głuszyce and is taken to a camp in Dörnhau (Kolce), where he is assigned to work in the Todt organisation. He stays in Dörnhau until the end of February 1945, where he is deported to other forced-labour camps. On April 23, 1945, Leon Weintraub was freed by the French army and is recovering in the Donaueschingen hospital, and later in a French military sanatorium on the Reichenau peninsula. While in the sanatorium, he learns that his three sisters survived the Bergen-Belsen camp.

In autumn 1946, he begins studies in medical school in Göttingen. In 1947, he marries Katia Ketitehuff from Berlin – later a translator of Polish literature to German (e.g. prose of Janusz Korczak and Czesław Miłosz). In November 1959, Leon Weintraub comes to Poland, where he graduates from medical school, gynaecology & obstetrics, and starts a job in Warsaw. In 1966, he is awarded a doctoral degree and is appointed the head of obstetrics & gynaecology in Otwock.

In 1969, in the wake of anti-Semitic feeling, Leon Weintraub is falsely accused of abuse of authority and mismanagement. He loses his position as the head of department and is unable to pursue scientific work in the People’s Republic of Poland. In 1969, he emigrates to Sweden, where he remarries and lives to this day. In 2008, at Leon Weintraub’s initiative, a Jewish cemetery was tidied up and the Jewish community of Dobra near Turek – his mother’s home town – was commemorated.

The recording took place in the Museum of the History of Polish Jews POLIN in Warsaw.