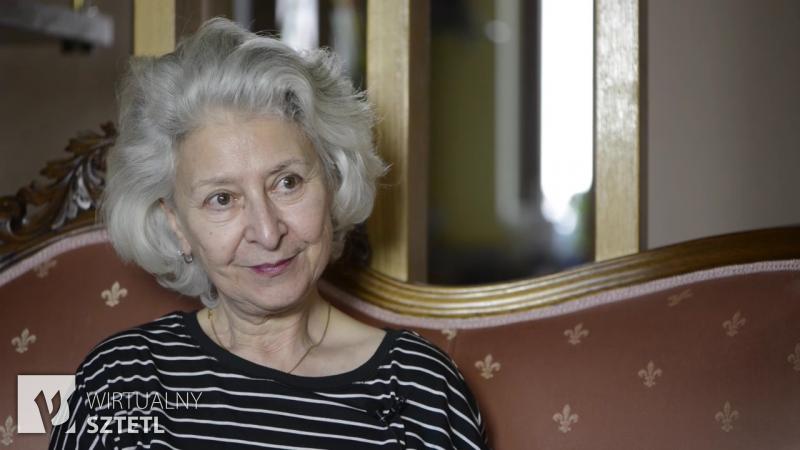 Dora Hiller-Mańczak was born in 1947 in Wałbrzych, where she still resides. Her parents come from Jewish families from Ozorków near Łódź, which knew each other before the war. They met in Wałbrzych, where many Jews who survived the war travelled to. Her mother, Fradla Hiller née Krygier survived the ghetto in Łódź, was sent to the camp in Brzezinki and then to one of the Gross-Rosen camps in Dzierżoniów. Her father, Chaim Hiller, who was a member of the Bund before the war, survived the war in the Soviet Union. Despite his socialist views, after the war Chaim Hiller joined the Polish United Workers' Party (PZPR). Dora Hiller-Mańczak has one sister - Irena Rosynski née Hiller, who has lived in Sweden since 1970. In the family home of Dora Hiller-Mańczak Jewish traditions were upheld- the mother respected the kosher rule and the parents often spoke to each other in Yiddish. Dora Hiller-Mańczak attended a Polish public school and secondary school for 11 years - and she remembers being the only Jewish girl there. In 1956, her parents - despite differences in opinion in regard to the matter of emigration (the father wanted to remain in Poland, while the mother wanted to emigrate) decided to leave Poland for South America. However, as a result of the events of October 1956 and hoping for things to improve in Poland, they decided to stay. In the years 1964-1970, Dora Hiller-Mańczak studied at the Wrocław University of Technology at the Faculty of Sanitary Engineering. She is a sanitary installation engineer by profession. After the events of March 1968, her sister emigrated to Sweden and her parents to Denmark. Dora Hiller-Mańczak decided to remain in Poland as she had already started a family here - her husband Bronisław Mańczak is a Polish catholic. In the 1980s, Dora Hiller-Mańczak was active in NSZZ “Solidarność” and worked at the production plant of sanitary installations “Inwest Projekt”. She has one son and four grandchildren. Currently, she is retired. She has become involved in the activities run by the Wałbrzych branch of the Social and Cultural Association of Jews in Poland. In matters of identity, she considers herself first and foremost a Jew.

The recording was made in Wałbrzych at the home of Dora Hiller-Mańczak.