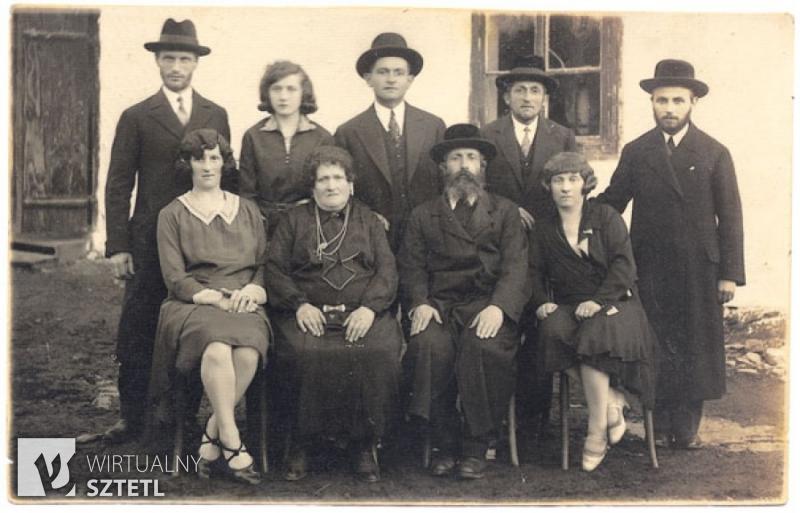 In the years 1562–1570, 13 Jews were accepted as the town's citizens and included in the municipal register. In 1580, the Jewish community had its own school. At the time, 18 Jewish families lived in the town of Lesko (ca. 100 people in total). In 1608, a synagogue and a hospital for the poor were established in the town and in 1614, the Jewish school was re-opened. In 1613 and then later in 1868, the cemetery was expanded. A registry of head tax payers from 1676 mentions 137 Christians and 83 Jews (heads of families). The Jewish community grew quickly, especially in the second half of the 17th century. In 1705, an epidemic, most probably cholera, killed 303 Jews.

The Jews of Lesko collected the czopowe tax[1.1] and traded in leather, herrings, grain, cloth, wine, oxen, rams, and lead. Some were artisans: butchers, goldsmiths, brewers, and tailors. They gave loans on interest (with annual interest rate of 42–44%). They owned taverns, inns, and mobile market stalls (they travelled to even the most remote villages in the Bieszczady Mountains). In 1612, two Jewish stall-keepers from Lesko were robbed in Wola Michowa. They also took journeys to Kraków (1593), Lviv (1654), and Zamość (1608).

High economic status of the local Jews resulted in numerous conflicts with the Christian population. This is why in 1602, a resolution proposed by the townsmen of Lesko and approved by Stanisław Stadnicki, the owner of the town, included several provisions relating to Jews[1.2].

The Jewish Community Co-operative of Lesko was established at least several dozens of years before 1590. Presumably, the community's first “elder” was Aharon ben Jicchak, who died in 1591. Earlier on, the local Jewish community had belonged to the Co-operative of Przemyśl. In 1656, Józef Lazurowicz from Lesko held the post of an “elder” of all Jews living in the Sanok Land, whereas the Jewish seniors of the town were: Chaim Samuelowicz, Abram Izaakowicz, and Marek Moszkowicz. In the years 1705–1724, The Council of Four Lands was forced to intervene in constant disputes between the Jewish communities of Lesko and Sanok. The first known cashier of of the Chevra Kadisha fraternity was Jakow ben Jehuda Jidl, who died in 1729.

According to the 1765 Census, 587 Jews lived in the town, while the whole Community Co-operative comprised 1656 people. At the time, it was the most numerous Jewish community in the Sanok Land (larger than the Jewish community of Rzeszów). It was also in 1765 when Jews were allowed to purchase land. The surnames of Jewish inhabitants of Lesko indicate the places they migrated from: Amszterdamski, Baligrodzki, Dobromilski, Jarosławski, Przemyski, Radochoński, Sokolski, Wrocławski, and Zagórski (people from, respectively: Amsterdam, Baligród, Dobromil, Jarosław, Przemyśl, Radochów, Sokół, Wrocław, and Zagórze). At the time, Lesko was the only town in the Sanok Land and the Przemyśl Land where Jews were considered to be citizens equal to Christians. In 1792, twenty years after incorporating Lesko into Austrian-controlled Galicia, local Jewish children were allowed to attend both the cheders and the Deutsche-iudische-schule. In 1799, 1084 Jews lived in the town, making up 51.2% of the total population. It was the most numerous Jewish settlement in Subcarpathia.

At the end of the 18th century, an important Hasidic centre was established in Lesko; it quickly gained importance throughout the Sanok region. The first well-known tzadik was Samuel Szmelke. Naftali Tzvi Horowitz of Ropczyce (1760–1827), whom M. Buber calls “a famous rabbi,” as well as his brother Rabbi Jokel Gluger (died in 1835), were both born in Lesko, in the family of Menachem Mendel, a rabbi and a tzadik. After his father’s death, Naftali became the Rabbi and Tzadik of Lesko[1.3]; at the same time, he still worked as a rabbi and tzadik in Ropczyce. His father, Menachem Mendel, had been the Rabbi and Tzadik of Rozwadów before he moved to Lesko. The function of Lesko's tzadik was also performed by Naftali's son, Abraham Chaim (died in 1831). Lesko was also the seat of a tzadik named Tzvi Hirsz Friedman (1798–1874), a disciple of Chaim Halberstam of Sącz. Later on, no tzadiks resided in Lesko. The local Hasidic community became divided between the supporters of the Fridman Tzadiks from Sadogóra and the Halberstam Tzadiks from Nowy Sącz.

At the end of the 19th century, Jews owned a brickyard, a brewery, a distillery, four inns and five taverns. They dominated the local trade and crafts – they owned more than 80% of all shops, workshops, and other service points in the town. They were also involved in the sale of ship tickets, ran two brass mills, a teashop, a wine factory, a mead factory, and a mineral water plant. The local refinery was also owned by a Jew – Arpad Szemery, who came to the town from Hungary.

WWI caused a substantial decrease of the population. Throughout the war, the occupation authorities ruling over the town changed four times. In 1921, 2,338 Jews lived in Lesko, and 10,294 – in the whole district. In the interwar period, the rabbis were: Kanner, Abraham Chaim and Rabbi Majirl; Abraham Granik served as lower rabbi. The Jewish community was headed by Mendel Hager. Leib Dym was in charge of the Jewish public register. At the time, there were ca. 10 cheders in the town, each attended by 20 to 40 boys. Among the teachers were: Abraham Holstein, Icze Bojm, and Lajzer Fleischamn.

Girls from wealthy families studied at a the local branch of the Beys Ya'akov religious school. A number of societies and associations was active in the town, among them Yad Charuzim, Gemilut Chesed, Chevra Kadisha, and Tarbut; some of these organisations ran day-rooms. Several political parties set up their local branches in Lesko: Poale Zion, Aguda, the Yemenite Association, and Mizrachi. Many Jews joined the illegal Communist Party of Western Ukraine. There were also various youth organisations such as: Betar, Ha-Shomer Ha-Tzair, Ha-Noar Ha-Tzion, and Tsukunft.

The local Jews owned the Jewish Community's Credit Union and a printing house ran by Rivka Schaff. Both Poles and Jews belonged to the United Crafts Guild. In 1934, Dr Alter Müller, a Jewish lawyer, became the Vice-Mayor of the Lesko. (It is also worth mentioning that in the folklore of Jewish people from Galicia, the Jews of Lesko were the synonym of fools).

In September 1939, Lesko was taken by the German Army, which occupied the town from 9 to 27 September. Later on, the town came under the control of Russians. Some Jews and local Ukrainians enthusiastically welcomed the new occupant. Soviets appointed a local Jew named Douf as the governor of the town. Jews from other towns situated in Subcarpathia arrived to Lesko after being displaced from the regions occupied by Germans. Nonetheless, some Jews considered to be a part of the bourgeois were deported to remote parts of Russia, for example to the Jewish Autonomous Oblast with capital in Birobidzhan.

The Nazi forces re-entered Lesko on 24 June 1941. In the spring of the following year, a ghetto for the Jewish population was established in the town. It housed 2,750 people. A local notary by the name of Teich, who arrived to Lesko from Drohobycz at the beginning of 1940, was appointed as the chairman of the Judenrat.

The ghetto was liquidated on 14 August 1942. After a selection, ca. 100 elderly and disabled people were shot to death at the local cemetery. Everyone else was transported to the concentration camp in Zasław. In September 1942, during Yom Kippur, approximately 500 Jews from Lesko were shot to death there. Until the summer of 1943, the Lesko cemetery was the sight of executions of fugitives from the concentration camp in Zasław and Jews in hiding who had been denounced. Ca. 70 people lost their lives there.

After the war, the Ukrainian population of Lesko was displaced and the town's population decreased to ca. 1,000 residents. Approximately 40% of the town was destroyed.