Photos: 2
previous next
Go to Gallery

The 9th (or 22nd) of March 2022 marks the 105th birth anniversary of Zuzanna Ginczanka – an increasingly popular inter-war poet, the authoress of the poem *** (Non omnis moriar).

Zuzanna Ginczanka was born as Sara Polina Ginzburg (Gincburg) in Kiev. In the autumn of 1917, her parents moved to Rivne, Volhynia, as they ran away from the Russian civil war. In this city, Ginczanka spent her childhood and made her first literary attempts. Not much is known about her father, Szymon Gincburg. He is said to have been an actor and theatre director who found it hard to get used to the realities of a provincial town. After a short while, he left his family and went to Berlin, and then to the United States, where he tried to start a career in the film industry under the name of Senia Gardeni. Having divorced Zuzanna's father, her mother Cecylia, née Sandberg, got married again, this time to Czech brewer Walter Roth. In 1922 or 1923 she and her husband went away from Poland and settled down in Pamplona. Six-year-old Sana (as the poet was then referred to) was left in the care of her grandmother, Klara Sandberg – a pharmacy owner.

According to Ginczanka's biographers, she talked to her mother in Russian. She learnt Polish – the sole language of her works – on her own. Why did she choose Polish? She is said to have been enchanted by Julian Tuwim's and Bolesław Leśmian's poetry and by Ewa Szelburg-Zarembina's prose. At the age of 14, Zuzanna Ginzburg debuted in the Echa Szkolne periodical edited by Czesław Janczarski (the later creator of the Miś Uszatek stories). According to Izolda Kiec, the 1932-1934 manuscripts of Ginczanka's youth poetry which were saved by Eryk Lipiński in September 1939 are a priceless document. The famous satirist and illustrator found and preserved the memoirs when he was liquidating the writer's Warsaw flat.

Young Zuzanna was an active participant in Rivne's literary and artistic life. She loved the Skamander poetic group and was a voracious reader of Wiadomości Literackie (Literary News). While still in her home town, she started correspondence with Julian Tuwim, and encouraged by him decided to take part in the Young Poets Competition organised by Wiadomości Literackie. The 1934 award for her "Gramatyka" (Grammar) poem was not only a huge achievement, but also constituted a breakthrough in her life.

In 1935, almost immediately upon finishing her middle school, she moved to Warsaw. She started her adult life in the capital. Undoubtedly, the "Warsaw period" was to be the most colourful in Ginczanka's short life. The eighteen-year-old soon became part of the café world of literary Warsaw. She became friends with Skamander members, Józef Czechowicz, and first of all with Witold Gombrowicz. She was a regular customer at the Zodiak café, where the author of Ferdydurke used to have his private table. The topic of her great beauty comes up all the time in the recollections of people who remembered Ginczanka. She must have been admired by men, but from today's perspective the artists' compliments reflected a rather stereotypical perception of the poet as a beautiful Jew of exotic looks and tempting Sulamita hips.

Ginczanka was not and would not like to be treated only as a beautiful decoration of a café table. She undoubtedly had literary talent but during her life managed to publish only one volume of poetry, O centaurach (1936), which was favourably received by critics. She was the only female co-editor of the legendary satirical periodical Szpilki, and she also cooperated with the Polish Radio. In her works she did not bring up Jewish themes and did not write in Yiddish (according to reports, she did not speak the language). Although she considered herself to be a Polish poet, she did not try to conceal her roots. She became a victim of anti-Semitic attacks even before the war. In 1937, someone going by the nickname of o-set published a slanderous piece called Koleżanko Gincburżanko! Nie bądźcie... Ginczanką (Colleague Ginzburg! Don't be... Ginczanka), in which he wrote about a "mysterious Sarmatian poet" cooperating with Szpilki and hiding her Jewish descent. According to Maria Brandys, the poet did not attend lectures at the University of Warsaw (she studied at the Faculty of Humanities) mainly due to the anti-Jewish sentiment.

In June 1939, she went to her home town for holidays. The war broke out when she was in Rivne. She decided not to go back to Warsaw. In October, she moved to Lviv. In 1940 she unexpectedly married Michał Weinzieher – a lawyer, intellectual, former MP and renowned art critic. There were rumours in Lviv that the marriage was unsuccessful and the couple were not suited to each other. The poet started a relationship with graphic artist Janusz Woźniakowski. She published several of her works and translations in Nowe Widnokręgi and Almanach Literacki and became member of the Union of Soviet Writers of Ukraine. Contrary to Ksawery Pruszyński's accusations ("spreading the Soviet-Polish culture), she did not become an advocate of Socialist poetry, and even less of the generally understood Soviet cultural policy.

In 1942, she was denounced by Zofia Chominowa, and Ginczanka's most famous poem *** (Non omnis moriar) was written at that time.

After being denounced, Schutzpolizei came to Ginczanka's flat three times. Thanks to the help of a waiter she knew, the poet at the last moment managed to escape arrest. Soon after the incident, she and Woźniakowski went to Felsztyn near Krakow, but due to her looks and gossips about her Jewish roots she had to leave the place. She went into hiding in Krakow and its vicinity. She introduced herself as Marysia Danilewicz, of Armenian descent. In 1944 she lost both her husband and friend. Weinzieher and Woźniakowski were sentenced to death. She was arrested by the Gestapo in the autumn, probably after being denounced by a neighbour. She was tortured and brutally interrogated in a prison in Montelupich St., and then transported to a prison in Czarneckiego St. In December 1944, she was executed in the prison yard.

Her Non omnis moriar was printed in the Odrodzenie weekly in 1946. Julian Przyboś wrote: "We read out the poem from a crumpled and torn piece of paper on which the poet wrote in pencil, from a piece of paper coded like a secret message in a dangerous place. We had to guess the adjective "Jewish" from a single letter «j»." The text that survived almost by a miracle was later used as evidence in the trial of Zofia Chominowa, who in 1948 was sentenced to four years in prison for the denouncing. 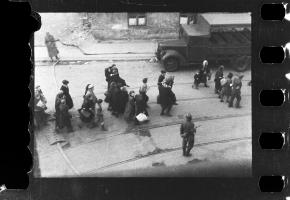 16th January 2023
From the January self-defence to uprising. Warsaw Ghetto
We start the celebration of the 80th anniversary of the outbreak of the Warsaw Ghetto Uprising under the slogan "Thou shalt not be indifferent". 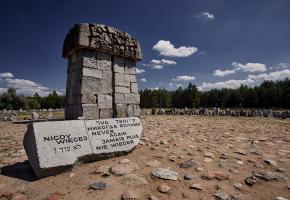 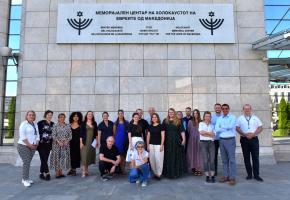