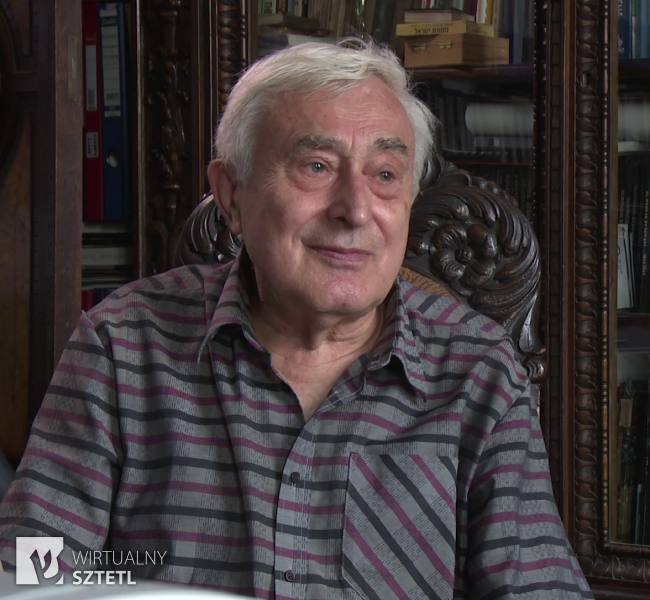 Jan Jagielski was born in 1937 in Toruń. He survived the occupation living with his parents in Lublin. Jan Jagielski arrived in Warsaw in 1945, where he attended the second grade of a public school. In his childhood years, his father used to take him to the area of Warsaw where the Ghetto was once located - at that time, Jan Jagielski was not fully aware where he was. In the 1950s, Jan Jagielski attended a secular secondary school run by the Children’s Friends Association (TPD). At that school he met many friends with Jewish ancestry and made friendships which have lasted till this day. In 1968, he was a witness to the antisemitic political campaign as a result of which many of his friends had to leave Poland. Jan Jagielski graduated with a degree in geology from the University of Warsaw and for many years worked as a geologist, , in Iraq, among other places. In the late 1960s, he became involved in documenting Jewish cemeteries in Poland. He is a co-founder of the Jewish Flying University - an informal group of social activists who for many years strived to commemorate the history of Polish Jews and learn about Jewish traditions. In 1991, Jan Jagielski began working for the Jewish Historical Institute (Żydowski Instytut Historyczny), where he works as manager of the Monument Documentation Department. Jan Jagielski is a well-known social activist and expert in the history of the Jewish cemetery in Warsaw and the Warsaw Ghetto.

The conversation was held in the office of Jan Jagielski at the Monument Documentation Department in the Jewish Historical Institute.