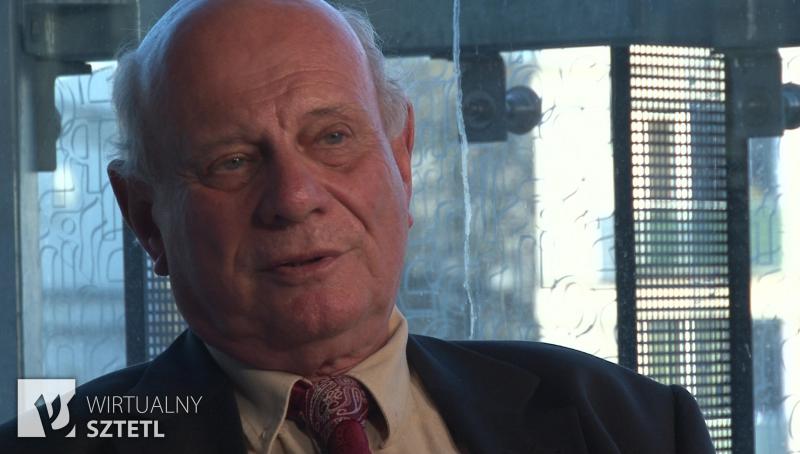 Norbert Lampert was born in 1935 in an assimilated Jewish family in Warsaw. He grew up in an apartment at 54 Wspólna Street, his father was the administrator of the building at 4A Nalewki Street. Norbert’s uncle emigrated to Palestine. With the outbreak of World War II, his father and uncle fled to Vilnius and later to Kaunas. Together with his mother and grandparents, he finds himself in the Warsaw Ghetto. With increasing deportation actions, they move to Nalewki 28 Street, which housed a repair shop for Wehrmacht uniforms. The interviewee’s mother decides to leave the ghetto. The escape to the Aryan side is possible thanks to the help of Zygmunt Laskowski, who takes Norbert and his mother to his apartment on Mokotowska Street. They move to a hideout flat on Aleja 3-maja. Norbert's mother is ill and goes to St. John's Hospital. Norbert visits his mother at the hospital - it is the last time he sees her. His mother decides to return to the ghetto - she cannot stand the psychological pressure of life on the Aryan side. She dies during an attempt to enter the ghetto. The interviewee stays with Władysława Schultz, who manages to obtain a false birth certificate in the name of Leszek Gołębiowski. Władysława Schultz decides to leave Warsaw and together with Norbert moves to the Malinówka estate. They stay there until the end of the war. In 1946 Norbert Lampert and his uncle go to Germany, and in 1949 to Israel. In 1972 Norbert Lampert graduates from the Haifa University of Technology.

Interview recorded in the POLIN Museum of the History of Polish Jews.